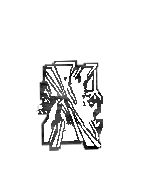 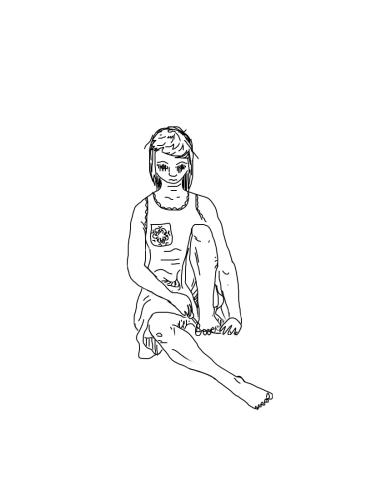 Likes: the color amber, dried flowers, pseudo-spirituality, friendship with Christine, the smell of cheap tobacco, games with a lot of blood.

Seen with: “I hate wearing things that are too clingy. I’ve always had this strange half-nightmare waking up, where I feel the comforter and the blankets are too tough and I can’t escape. I prefer things that are loose. You can hide in them; even though you’re in plain sight, you feel unseen. I even like wearing my glasses even when I can see just fine. It feels like a convenient mask.”

7/3/2017:
i heard something today that brought me back. a stupid little russian song. someone told me it’s a hot new trend, they put these songs behind pictures of girls shooting guns, drinking, etc. after so many years of hatred, they miss the old country more than me. they ask me all the time, “what’s it like, oh my god. did you have to sniff glue? did your mom have to fuck strangers for money?” i almost slapped one of these sluts

i don’t remember much. i think we had it good. whenever i saw Michael, he’d give me a big stack of foreign money or something and tell me to study hard at school. he said he wished he’d been smart and studied hard like mama. i think every stupid guy with more success than sense daydreams about being some kind of writer. mama says i’m too hard on him, but she talks to him like a dogg that shat the carpet. i remember nights in old cold cabins, and having to put fire in an oven for hot water. i remember doing stupid math homework by candlelight yuck

i remember the violence. i think it’s always fascinated me. i remember the glowing streaks of red. those old tv’s made everything look like glittering gold, pulsating like an open wound. i remember the soldiers marching in the streets. here; no-one really thinks about war, no-one even remembers how it started. but back there, and then, when the planes were falling and there were bombs planted everywhere... my mom isn’t religious but she still says prayers every time she gets on the subway. Michael wanted to buy her a gun, but she was worried i’d find it and hurt myself. it would have been cool to have one, even though i was a little kid when we’d left. when i ask my mom about it, she says i was lucky that i skipped the decades before. i don’t really talk about her much, but i had an older sister; my parents had her when they were young and still together. she died in a car accident or something, Michael said some drunk asshole she was with drove into a truck but mama says her boyfriend killed her out of jealousy. i think it pulled mama and Michael apart, but mama said she didn’t really think about her too much. they talk more about an old dog they had back at their apartment. i don’t really remember much about her. i wonder if we’d been close.

the strongest memory i have... i remember staying after school because i did bad on my math exam. some old fart lectured me for two three hours, pederast. it was close to winter so the dark already was setting, orange light coming through the big creaky windows. i walked down the stairs; in the corner by the elevator, i saw a girl sitting in a chair, trying to swallow her sobs. i whispered “hey, what’s wrong...” but i came closer and i saw her face was covered in blood and i screamed. i heard rumbling steps come up the stairs; two big girls, one fat, blonde and the other caucasian-looking they told me to fuck off. i was so scared i pissed myself and i dropped my little notebook and i ran so fast i fell down the stairs. my heart was beating so fast and my knees were bleeding too, but worst of all i felt no pain. I felt just shame, and i felt embarrassed for being so weak, so vulnerable. the whole day, the next few days i had weird fantasies; about having a knife, a gun, dying in a bloody gunfight. suddenly, i had a lot of violent thoughts, i’d daydream about killing, and every time i saw those two girls i’d feel my whole body tense up with anticipation and adrenaline. a girlfriend told me they sent the bloody girl back to Chechnya. i daydreamt about the girl’s brothers coming to the school for revenge. i imagined the classes all filling up with fire, flames eating up the chairs and the books and the stupid whores and i’d feel the heat course through my body. 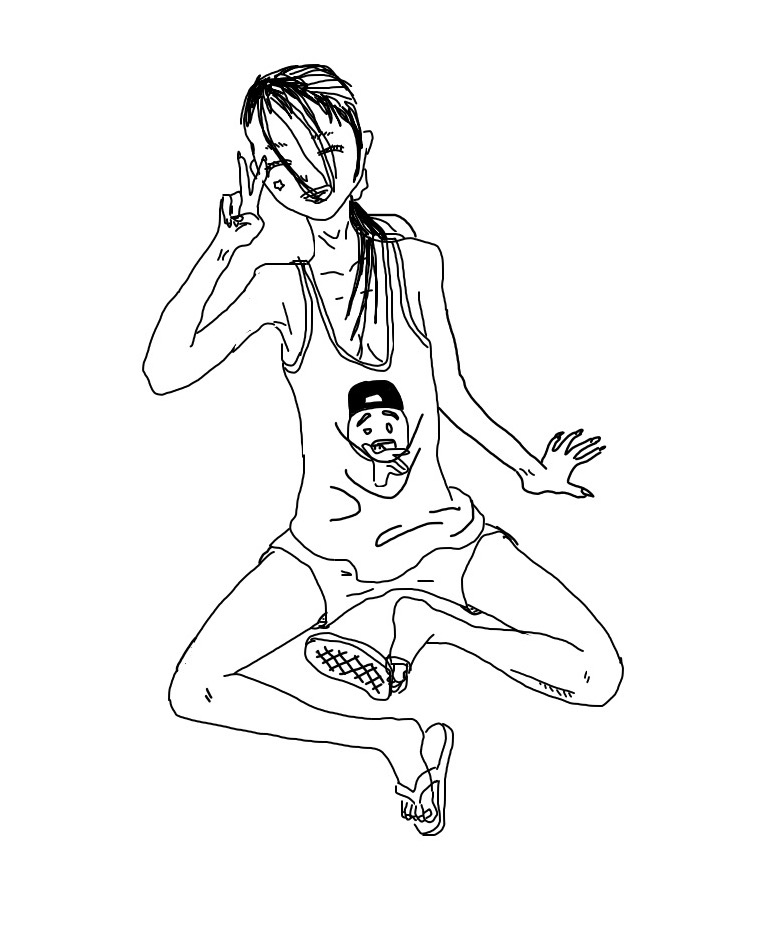 Seen with: i want to wear something so hot its peeling off of me and the flash is sucking on my face and licking my socks. i’m all by myself i’m SO damn sad. :( :( :( ... imagine my little belly heaving with juice, lipstick a little smudged on my lips.

“Christine Leung’s will and testament,” scribbled and then crossed out with a blue-pink gel pen. Every ‘i’ is dotted with a heart.

7/3/2017:
“Hi mom, dad. You’re probably gonna read this, looking for answers or something. You’re gonna pretend you never saw it coming. You’re gonna have closed eyes, pretending your tears are some kind of glue and that blindness was something other than every single terrible choice you’ve made. You might think I did this out of hatred, that I had a heart so heavy with revenge I’d gladly crater onto the concrete and splash myself on all the downtown windows just to drive a dagger thru your ugly black hearts. You are mistaken. You are so so so mistaken. Believe it, even though you are vain-- none of the choices I’ve made had anything to do with either of you.”

“You will grab Yelena, you will box her ears like you did to me; you will beat the blood out of her little face and tell yourself they’re answers. Believe me she is not to blame for anything, she’s only taught me how to sharpen my little dagger with which I chisel & carve a piece out of rotting earthly wood. I’d like to share something with you, something I hope you could read if it turns out I’m having a funeral soon.”

“Like others, I’ve always felt deeply that I was somewhat different. Unlike others, I’ve always been treated different. Where others failed, I’ve always succeeded; I’ve never not gotten what I wanted, either through stealth or sheer force. Where others are flabby, sloppy I am poised, my hair up like an angry little wasp. I’ve never felt weak; even when my bones break, as I feel deep hot red blood coarse course through my veins. I remember the very very very first time I realized that the rest of the world was merely fragile glass aching for a fist: a bully, her fat pale face stinging crimson as she pulled her eyes with her fingers to mimic mine, thought I was just another narcissist little bitch with her stinking lunch-box and ripe pussy for the taking. Right before that very moment, I believed myself to be a fragile flower, who’d wilt away in the heat of the sun if I’d exposed myself to her powerful heat. Then; for only an instant, I looked down at my two hands, I held them fast and cut their shaking. They formed into fists of rock, made of sentiment sediment so hard it could shatter even Jackie’s face. I felt my entire body tense up like a spring, and my entire body twisted, then released in a big aching exertion... the bully’s face turned into an empty hunk of meaningless flesh, and her teeth seemed no more genuine than plastic Halloween shit. She fell backwards and cry, cried, cried for sympathy. I felt so much disgust for her that all humanly feeling fled my body, and I landed another blow on her head the way you’d crush a stupid shitty little bug with your foot. A teacher pulled me away, down ‘twards the exits; I looked around and noticed that the riotous screaming had turned to stunned silence. As the police officer and the principal ran down the hallway towards me, I looked down at my still, bloody fists and felt nothing stir in my heart of hearts. I felt no fear. I haven’t felt it since. Every single moment since then has felt fake like reality TV.”

At the bottom, there’s a bleeding heart with a dagger through it, flanked by two little smiling kitten faces. 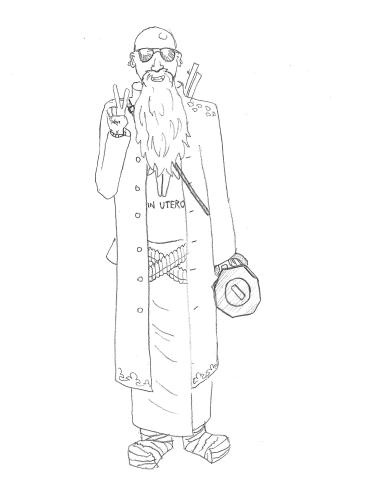 Seen with: "i used to love going to concerts as a kid. for some reason, id kick and scream and ask my mom for money to buy a t-shirt even if i didn't care so much about the band. then i'd show it off to people at school, even though most people ignored me. there were a couple of people like me though, who were into it. i never really understood people who paid so much for clothes that didn't mean anything, except that they were expensive. what's the point? where's everyone going to so fast?"

In the ______, an unremarkable kid with a penchant for Soulfly and Nirvana t-shirts just finished high school. His yearbook quote reads, "I’m _____. Wow, 16 years old already. Time totally flies. I have no idea what comes next, or what I’ll do when I graduate. I hope everything that is good in this short life comes to you guys."
_____ 23/17

After graduating he lives with his parents and spends his days delivering mail throughout the village and drinking on the weekends. A blog entry from ______ reads "Holy fuck, I’m bored! I’ve been staring out of the window for days with nobody passing. What a load of shit, I want some action, something to happen."

Eight years later, the kid _____ sports a bald head and long red beard. He wears a djellaba and looks into the camera with an empty intensity.

Amid the ruins of _____, the kid, who probably never met a Muslim his entire life growing up, explains how he discovered the Qur'an amid the media-frenzy around the far-right _________ campaign against immigration and Islam. He recalls a particular night, at a party, where he feels disgusted with all around him, wandering around drunk with a total lack of purpose or direction. How the suffocation of the village, the placid security it offered, and the endless cycle of meaningless repetition that gnawed at him started to fall away in the light of the shahada. Soon, a fire starts to burn inside him that leads him to make contact with radical jihadists. Isolated in his bedroom, in between his mail delivery rounds and the increasingly infrequent drinking, the internet opens the door to a world pregnant with meaning and an intensity he had never encountered before. He starts devouring the works of Sayyid Qutb and severs all contact with his old friends. Finally, he boards a flight to Turkey and travels in secret to the Zone to meet up with operatives of either Jabha Al-Islamia or Jabhat Al-Nusra. In his last video message he mentions he never plans to come home. If he doesn’t become a martyr in _______, if he will see the fall of Al-Assad and the foundation of the Caliphate, he will travel to Iraq to continue down the path of the sword. It is unclear whether the kid is still alive. After his last video message there has been complete radio silence. Whatever his fate, it seems he knows what to do now.